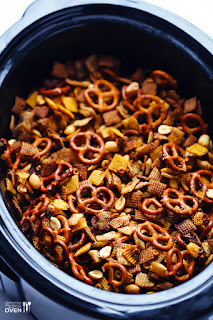 Did you know that your favorite homemade Chex Mix recipe can be made in the slow cooker? Give it a try!
Prep: 10 mins Cook: 3 hours Total: 3 hours 10 mins
Ingredients:

Add cereal, pretzels, cheerios and peanuts to the bowl of a slow cooker.

In a separate bowl, whisk together butter and seasoned salt until the salt is dissolved.  Stir in the Worcestershire sauce until combined.

Drizzle the sauce evenly over the top of the cereal mixture.  Toss for about 1 minute, or until the mixture is evenly combined.

Cover and slow cook on low for 3 hours,  stirring at the 1 hour, 2 hour and 2.5 hour marks so that the mixture does not burn.  Then spread the mixture out onto a few baking sheets or parchment paper in an even layer until it cools to room temperature.  Serve, or store in a sealed container for up to 3 weeks.

*If your slow cooker does not have a tiny hole in it to let air escape, it may collect too much condensation which could make the Chex Mix get too soggy.  If that is the case, I recommend placing a towel underneath the lid of the slow cooker to collect the condensation.
Posted by Linda Hazekamp at 5:12 AM No comments: